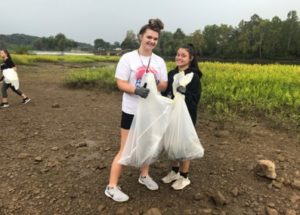 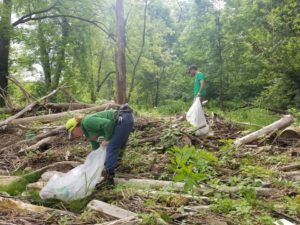 Acquired: Devol Run Preserve formerly known as ASH PROPERTY was acquired in 2003 using Clean Ohio funds although a 25% match is required. Financial donations were solicited and received and the balance was covered with in-kind work on the property. Since its location in relation to the dam means that most debris that comes over the dam ends up on the upper end of the property during high water events, there is ample work to be done each year.

Size: The tract is located about 400 feet downriver from Devol’s Dam on the west side of the Muskingum River in West Muskingum Township in Washington County. The north end is bordered by Devol Run which is the reason for the railroad trestle which is located there.

Location: The land occupies the 359 ft. of floodplain between the railroad track at the base of the slope and the river itself.

Description: The upper end is more ‘beach-like’ to the edge of the river and has very large silver maple and sycamore trees primarily. It seems to be ‘building’ land overall and during low-water during the summer an extensive ‘sandbar’ extends to the middle of the river. The river below Devol’s Dam contains one of the richest mussel beds in the state with a wide diversity of native species including some state and federally rare species.

The downriver end of the tract sets higher with a fairly steep vertical bank of approximately 10-15 ft. to the river at pool stage. This area was used agriculturally and most trees are about 25 cm. dbh. The understory is intact with gill-over-the-ground gradually being replaced by floodplain forest community species. The number of invasive exotic species is relatively low but wintercreeper and Japanese honeysuckle should be pulled at every opportunity.

There is a badly eroded right-of-way which is shared with the former owner from Ash Road at the top of the ridge down slope and across the floodplain that forms the south property boundary.

Management goals are to control Non-Native Invasive Species, keep high water debris cleaned up at least annually, and, with the help of the wildlife officer, try to eliminate camping.

This Thanksgiving (and all year) I'm thankful for all the support our members provide for our mission of preserving natural areas and expanding environmental awareness. What are you thankful for? ...

Ohio Department of Natural Resources wants your input to determine outdoor recreation priorities. The survey takes about 15 minutes and is open to all residents of Ohio. ohio.qualtrics.com/jfe/form/SV_0jMMPPHUcrL9W86 ...

While our potlucks are done until spring, you do have a chance to see one of our properties tomorrow night and learn about the natural history of the area by joining the Marietta Natural History Society for a night hike at the Beiser Field Station. ...

When this happens, it's usually because the owner only shared it with a small group of people, changed who can see it or it's been deleted.
View on Facebook
· Share