Our brochures for Luke Chute Conservation Area have been updated and now include a trail map!  Download yours here or pick one up from the box near the picnic shelter. 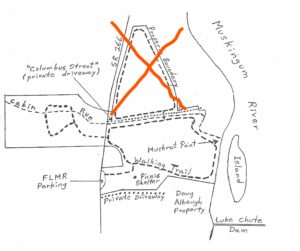 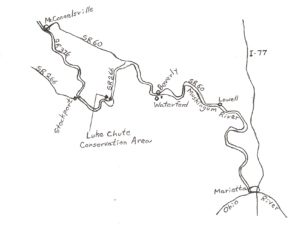 Acquired: 2006, by means of a grant from Clean Ohio Conservation Fund, with FLMR’s 25% contribution consisting of a conservation easement donated to FLMR, on an adjoining privately owned tract.

Description: Bounded on two sides by the highway and the Muskingum River, this land lies on two levels: floodplain and a higher bench. The floodplain portion is bisected by a small stream, Cabin Run. The level portions were farmed until several years prior to acquisition. The hillsides support mixed hardwoods.

Special Projects and Partnerships: In April 2006, American Electric Power planted approximately 9,000 hardwoods of mixed riparian species, in the old fields. This is part of AEP’s carbon sequestration program, and as such the resulting woods will be maintained as a natural area, with no timbering. The American Chestnut Foundation (TACF) provided 50 chestnut seeds, which were planted in April 2006, as part of TACF’s back-crossing program to produce mostly-American chestnut trees with the blight resistance of Chinese chestnuts. A pond sized to hold water for only a few weeks after a 3-4" rain event has been constructed under the large transmission line in the middle of one of the future forested areas. The sandy soil that is present on the site and this pond should make re-introduction of Eastern Spadefoot Toads a success on this preserve.

Public Access: FLMR has provided a parking area with signage visible from the highway, has developed approximately two miles of walking trails, and has built a picnic shelter. This has been done by volunteer labor and with salvaged materials.

Historical Interest: An old granary (building for storing corn and other grain) is being preserved. Possibly dating back to the Civil War or before, it is in excellent condition and shows the craftsmanship of that era.

Neighboring Properties: Bounded on the south by a 30-acre property owned by Doug Albaugh, an FLMR board member, who has donated a conservation easement to FLMR. Together, these two tracts constitute over 60 acres of protected land, including an island in the river, of over 5 acres. On the north, and between the conservation area and the river, north of Cabin Run, are privately owned lots with houses or seasonal cottages.

Environmental Factors: FLMR removed over 100 tires and a number of car batteries from an old dump site. Two barns and a silo are being torn down and removed. A high-tension power line crosses the property, as does a private driveway providing access to the home lots east and north of the property.

FLMR used a Clean Ohio Conservation Fund grant in order to acquire approximately 29 acres of a small wooded valley on Cabin Run on the opposite side of SR 266 from the main part of the preserve. An additional walking trail can be accessed there.

It seemed appropriate that the weekend before Thanksgiving, this turkey tail fungus caught my eye. ...

We accomplished a lot during our work day today at Luke Chute ConservationArea, thanks in large part to Marietta College leadership students. Although it's October, there are still some flowers to be found, if you look closely enough. ...

The purple is fading but these asters are hanging on, despite it being mid-October. ...